Texts published in the ‘Beiträge zur allgemeinen und vergleichenden Sprachwissenschaft / Contributions to General and Comparative Linguistics’ are available in the Open Access on the basis of the CC BY-SA license. 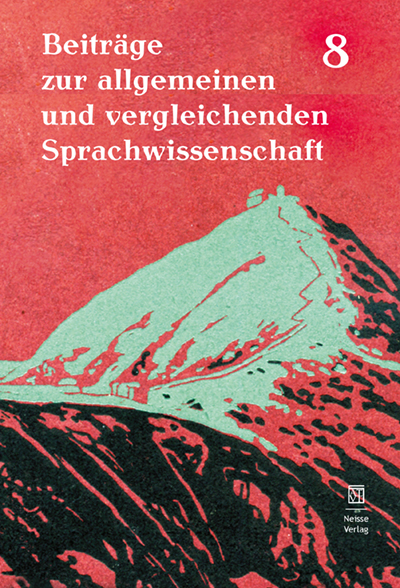 The aim of this article is to show which generative mechanisms are responsible for establishing a control relationship between syntactic structures. As a theoretical basis, the Movement Theory of Control by Hornstein was chosen because it has already been tested in numerous languages and has universal character. Its applicability was exemplified by some data of subject and object control in German. For this purpose, some derivations have been outlined. In addition, difficulties that this theory encounters were pointed out. For example, in the derivation of subject control over object, as it exists in the case of promise-verbs.

The topic of the article is the conduit metaphor of the metalanguage as a problem of translation. The essay is a continuation of a cycle of studies on the metaphor in meta-linguistic discourses. The Polish translation of Gerhard Helbig's work „Geschichte der neueren Sprachwissenschaft“ (‘The History of Modern Linguistics’) documents similarities in the metaphorics of the German and Polish metalanguages, which confirms the thesis about the congruence of metaphors of Western culture. Theoretical aspects will be discussed that may help in the translation of the metaphor.

Discussions on the status and nature of lexicography have been ongoing since at least the 1960s. Some of the most frequently discussed issues concern lexicographical theory, including its very existence, which some scholars find problematic. And if it is considered to exist, questions as to what can be treated as a lexicographic theory arise: Is it a theory of dictionary making practice? Is it a linguistic theory? Is it a separate lexicographical theory? The aim of the article is to present and comment on the divergent positions. Finally, the author draws attention to the factors that cause that the discussion on lexicographical theory is not always conducted at the appropriate scientific level.

The way master theses are prepared in the Department of German Studies, University of Wrocław has changed over the last thirty years. The main objective of the present paper is to show how students’ motivation has changed. The Bologna Process seems to be an important time frame, and at the same time a reason for many negative developments observed by the author. The paper addresses also what the author considers insufficient preparation of students to participate in the academic discourse, and the lack of knowledge about the true causes of students’ problems among lectures and professors. The author suggests that the seminar “Academic Writing”, introduced recently in the Department of German Studies may be a solution to the aforementioned problems.

Street names have not only the function of a topographical-spatial orientation but they also reflect the history and are a cultural and political instrument. At the time of the National Socialist dictatorship, street names were changed in Germany. Also in the cities of Poland, in the Second World War many streets and squares were renamed. The aim of this paper is to examine and describe the change of urban names in Białystok in the years 1939-1944, when Poland was under German occupation. A strong influence of the German language is apparent in German designations and more or less successful translations of Polish hodonyms. Nevertheless, some place and street designations still show their Polish origin. The paper discusses the extent of German influence on the official language of city plans and the ways in which the Polish streets were renamed. Moreover, an attempt is being made to determine which trends can be observed in urban designations.

The term keyword, created in 1954 by Pierre Guiraud, is also used in contemporary linguistics to describe words that, because of their frequency of occurrence, are characteristic of a particular text, the genre of a text or the writer's style. The indication of keywords defined in this way in Protestant funeral sermons, which are one of the most representative genres of German moralizing literature of the 16th and 17th centuries, is difficult and often does not provide an answer to the question of what is referred to in a given text. Based on the analysis of a sermon written by Johannes Bugenhagen on the death of Martin Luther (1546), the paper attempts to develop criteria for the selection of keywords in this genre of texts.

Das werdende einheitliche Deutsch im Lichte der graphematischen Untersuchung des Konsonantismus in einer Dorfwillkür aus dem 17. Jahrhundert / On the developing standard German in the light of a language analysis of the consonantism in a charter from the 17th century

The article hereunder presents the language analysis of a charter from 17th century titled “Wilkierz dla wsi klasztoru Panny Marji w Kartuzach” published by Stanisław Kutrzeba and Alfons Mańkowski in 1938 in Archiwum Komisji Prawniczej, volume 11. The text of an unknown scrivener was written in New High German in the Silesian dialect, what can be proved on the basis of the way of the notation in the law. The author introduces the results of his analysis showing the stage of the development of the consonant system with the appropriate examples.

The aim of the article is an acoustic description of German vowel elongation during live sports commentary. It is not about long vowels that are in time relation to the other segments in the lexeme, but about those that, regardless of the quantity, have an additional duration (over 0.2 seconds) in a particular communication situation. The research material consists of two sports commentaries. The first concerns Germany's victory in the quarter-finals of the 2017 IIHF World Hockey Championship; the second - the gold medal won by Gesa Krause during the women's 3000 metres steeplechase at the 2018 European Athletics Championships.